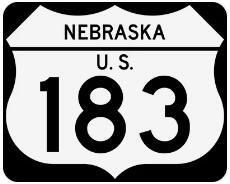 In Sterling, US 6 to Holyoke exits to the east and US 138 continues straight, paralleling the South Platte River and Interstate 76, which runs on the other side of the river. US 138 serves some towns and acts as an alternative to I-76, although there are few reasons to use this alternative for long distances. The valley of the South Platte River is slightly lower than the surrounding area, which is otherwise flat. In the town of Julesburg, US 385, a north-south route through the east of the state, crosses from Hurlington to Sidney. Shortly after, the border with Nebraska follows and US 138 crosses Interstate 80, the highway from Cheyenne to Omaha. Not far after that, at Big Springs, US 138 ends at US 30, which runs parallel to I-80.

US 138 was added to the US Highway network in 1926. The route has not changed substantially since then. However, US 138 was replaced by parallel I-76 between 1966 and 1970, which meant that the continuing importance of US 138 lapsed.

US 159 is a US Highway in the US state of Nebraska. The road forms a short north-south and east-west route in the far southeast of the state, serving only the small town of Falls City. The route is 24 kilometers long.

South of Falls City, US 159 in Kansas double-numbered with US 73 in Kansas enters the state from Hiawatha. Both roads then run for about 5 miles to Falls City, where US 159 turns east. US 73 then runs north and later west toward Omaha. US 159 then runs due east through the Missouri River valley. The Missouri border is reached after 16 kilometers, the US 159 in Missouri then continues a little further to Mound City.

US 159 was added to the network in 1934, but then ran only in Kansas. In 1945 the route was extended into Missouri, and with it a bit through Nebraska. US 159 is not essential to Nebraska, but it is the southernmost connection across the Missouri River in the state.

According to biotionary, US 183 is a US Highway in the US state of Nebraska. The road forms a north-south route through the center of the state, passing through no place larger than a small village. The route is 359 kilometers long.

South of the village of Alma, US 183 in Kansas enters the state from Hays and then crosses US 136 in Alma, the road from Edison village west to Beatrice, through the agricultural south of the state. The road then heads north, through a sparsely populated area of ​​circular irrigation farming. In the village of Holdrege, the largest town on the route in Nebraska with a population of 5,600, US 6, which is double -numbered, intersects with US 34. The road then continues its straight route north, crossing the Platte River, the largest river that actually flows in the state. Immediately afterwards you cross the Interstate 80. Shortly afterwards in the village of Elm Creek, the parallel US 30 is crossed.

After that, a long and lonely part of the route begins. Over more than 200 kilometers one crosses only 2 regional roads. This area is less fertile, so there is also considerably less agriculture here. This area consists of numerous small low hills. Many places are not on the way and they are usually no bigger than a few blocks. One crosses a somewhat more important state route twice. After Taylor one enters the Sand Hills, a desolate and lonely area. There is no place here in 100 kilometers. Between Bassett and Long Pine, the road is equally double-numbered with US 20. Not far after that, the border with South Dakota is reached, after which US 183 continues in South Dakota towards Winner.

US 183 was added to the network in 1930. The route then ended a little more westerly in North Platte, following what is now US 83. In 1932, US 183 was extended further north into South Dakota, but was not interchanged with US 83 until later. In 1967, US 183 was paved between Rose and Taylor, making it the last US Highway in the entire country to be paved. US 183 is now a somewhat secondary north-south route because it does not serve any place of importance in Nebraska.

Between the border with Kansas and the I-80 there is still some traffic, up to a maximum of 3,000 vehicles per day. To the north the road is really deserted with only 500 vehicles a day. Only 350 vehicles cross the border into South Dakota every day.