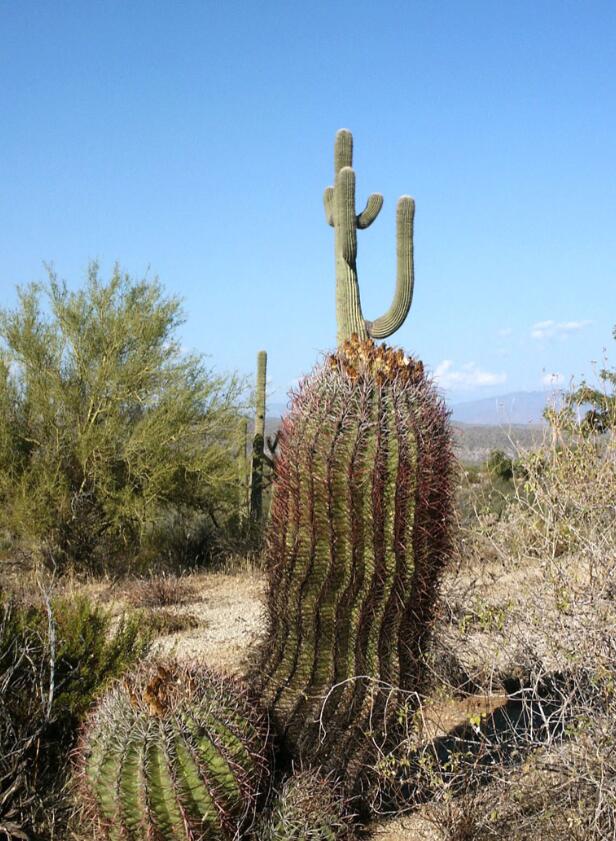 The huge cacti with their outstretched arms in the shadow of the setting sun: in most cases the Saguaro cactus is depicted in this image, as it is the most recognizable symbol of the American West. What many people don’t realize, however, is that these majestic plants, which are only found in a small part of the United States, are particularly heavily protected. The theft of a living plant – or just a part of it – will be punished with heavy fines.

According to travelationary, Saguaro National Park is home to this extraordinary saguaro cactus. The plant, which bears beautiful white, waxy flowers from the end of May to July, can be up to 250 years old. In July/August, the plant then bears fruit, which, by the way, is not only eaten by the animals, but also by the Indians. However, preparing it for human consumption is not easy.

Incidentally, the saguaro is the state flower of Arizona.

Saguaro National Park in the Sonoran Desert consists of two parts, Saguaro West and the much larger Saguaro East. The two parks are approximately 30 miles apart, separated by the city of Tucson. The total area of ​​both parks is 370 km².

Arriving by plane
Flight to Phoenix (PHX), or Tucson (TUS)

by car, motorcycle or bus from I-10: Saguaro West

Opening Hours and Seasons
Both Saguaro West and Saguaro East are open daily from sunrise (usually 7am) to sunset.

The Red Hills Visitor Center in Saguaro West has descriptions of the park and hiking trails, as well as books, maps, plant and animal exhibits, and film screenings.

Books, brochures, trail maps and guidebooks are also available at the Visitor Center in Saguaro East. There are exhibits and slide shows about the Saguaros and the Sonoran Desert. The Visitor Center is open every day except Christmas Day.

Entrance Fees
Admission is valid for 7 days and for both parts of Saguaro National Park: USD 20 for each private vehicle, USD 15 for a motorcycle and USD 10 for each person entering the national park on foot or by bicycle. No admission for children under 15 years.

America the Beautiful Annual Pass
The annual pass costs $80 and entitles you to visit over 2,000 US federal recreation areas and national parks for one year from the date of purchase. The entrance fee applies to the driver and all passengers of a private, non-commercial vehicle (or up to a maximum of 4 adults in total if per-person entrance fees are charged). Children under 16 are free. If you visit more than 4 national parks, it is usually worth buying the America the Beautiful Annual Pass. The pass can be purchased at many stores across the US and is also available in advance from various tour operators.

Campgrounds
There are no campgrounds or lodgings in any of the parks.

Climate and weather
The desert climate is most pleasant between October and April. During this time, daytime temperatures range between 16° and 22°C. However, nighttime temperatures can drop below freezing. The hottest period is between May and September. Daytime highs can soar to over 40°C while nighttime highs can drop to 16°C, even lower in the Rincon Mountains. There are two rainy seasons: From July to September there are short but violent thunderstorms with heavy rainfall. From November to March light rain is sometimes possible, but generally it is sunny.

Scenic Drive
The 10km Bajada Loop begins 2km northwest of the Red Hills Visitor Center. The tour takes you through a dense saguaro forest on an unpaved but well-carried road

Hiking Trails
A hike in Saguaro West can be a short walk on a nature trail or a day hike into the wilderness. There are two nature trails within 1 mile of the visitor center. The Cactus Garden Trail is a short, level, paved walkway lined with many desert plants.

The Desert Discovery Nature Trail winds approximately 750 meters along the gently sloping Bajadas at the base of the Tucson Mountains. The approximately 1 km long “Valley View Overlook Trail” offers a spectacular view of the mountains, the desert and the extensive saguaro forests.

Longer trails lead into the wilderness of the Tucson Mountains and foothills. Since the paths cross, you can shorten or lengthen the hike as you wish. Picnic Areas There are four picnic areas along the park road. Another can only be reached by a hiking trail.

Points of Interest
South of Saguaro West is the Arizona Sonora Desert Museum with over 200 living desert animals, birds and more than 300 different plant species. Further south is Tucson Mountain County Park, with hiking trails, horseback riding and a campground.

Panoramic
Drive The 12km Cactus Forest Drive winds through a vast stand of saguaro and offers a closer look at the diversity of nature in the desert.

Trails Trails
totaling over 200 km wind their way through the hilly desert land of Saguaro East. Short hikes give a glimpse of life in the Sonoran Desert. The 0.5km Desert Ecology Trail, laid out along the Cactus Forest Drive, provides a concise explanation of the function of water in the desert. This path is paved. Other trails along the Panorama Road are suitable for short hikes in the desert environment. Information about these hiking trails can be obtained from the visitor center.

Several longer trails lead through the vast wilderness of the Rincon Mountains and foothills. Few visitors experience this part of the park as it is only accessible on foot or by horse. It differs significantly from the lower cactus desert. Similar to northern USA and Canada, dwarf oak, spruce, ponderosa and Douglas fir grow here. Since many hiking trails cross in the park, hikes of various lengths can be planned. Horseback riding is permitted on all trails except the Tanque Verde Ridge Trail, Miller Creek Trail, and Rincon Peak Trail.

Picnic Areas
There are two picnic areas along the Cactus Forest Trail. Each has tables, benches, barbecue areas and pit toilets. Drinking water is not available.

Points of Interest
The Coronado National Forest surrounds the Saguaro East National Park to the north, east and south. Campgrounds, hiking trails, and picnic areas are also available there.

The Saguaro Cactus
The saguaro cactus (also known as the candelabra cactus) has been referred to as the ‘King of the Sonoran Desert’, the ‘prickly terror’, the symbol of the Southwest and a plant with personality. He is known for his quirk of exhibiting overly human traits.

This extraordinary giant cactus has been under the protection of the Saguaro National Park since 1933. Along with the cactus, many other creatures of the Sonoran desert community are also protected including other species of cacti, desert trees, shrubs and animals. In the abundance and diversity of life, the Sonoran Desert surpasses all other North American deserts many times over. Paradoxically, it is also one of the hottest and driest places on the continent.

Daily highs typically rise above 40°C in summer. Average annual rainfall is less than 300mm. Between the summer and winter rainy seasons, it is not uncommon for months without a drop of rain to fall. The plants and animals that can survive in this environment form one of the most interesting and unusual communities.

The natural products of the saguaro have been used by the inhabitants of the Sonoran desert for centuries. In summer, the Saguaro provides plenty of juicy, fig-like fruits. The native Tohono O’odham Indians harvested the fruit with long poles from tall cacti. They processed the fresh fruit into jam and syrup, as well as into wine for religious ceremonies. The fruit was so important to the Tohono O’odhams that the time of harvest also marked the beginning of a new year. The kernels of the fruit served them as seeds and food, as well as fodder for their chickens. The strong wooden skeleton of the cactus, capable of supporting an enormous weight, was used as a building material for huts and fences.

Special properties enable the Saguaro to store the most precious commodity in the desert, water. The surface of the cactus forms folds similar to those on an accordion. They expand and store the water that is absorbed by the roots. A spongy tissue in the trunk and arms serves as a reservoir where the water is stored as a gelatinous substance. Unlike most plants, the saguaro doesn’t have conventional leaves because those would just waste the water.

Photosynthesis – the food-forming process of plants – takes place in the trunk and arms of the saguaro. The spines not only protect the cactus from thirsty animals, but also from the sun and the drying wind. A waxy outer skin helps the plant reduce moisture loss even more. The saguaro collects the water through a network of roots that lies about 10 cm below the surface and spreads radially from the trunk as far as the saguaro is tall. During a single rainfall, the surface roots – together with special small root hairs that grow thanks to the moisture – can absorb up to 700 liters of water. This water supply lasts for a whole year.

Saguaros bloom in abundance from April to June. Each blossom only opens in the cool of the evening – i.e. after sunset. By the following afternoon, the blossom had already withered. This process is repeated night after night over a period of about four weeks – until around a hundred flowers have bloomed on each saguaro. 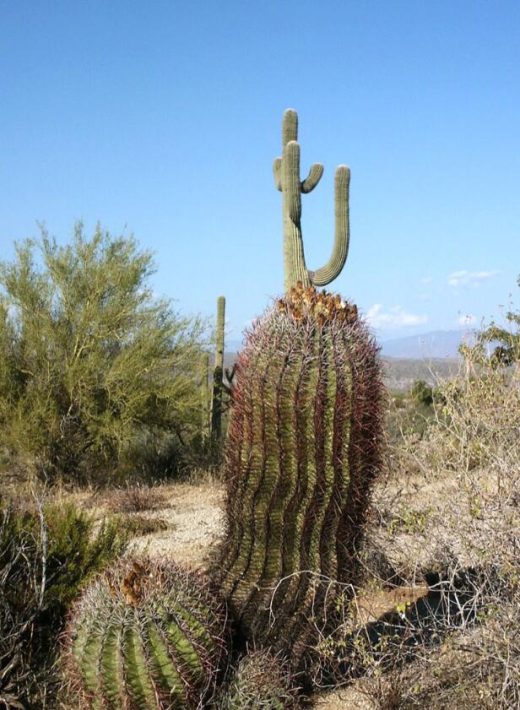